Meet Bongo! Bongo is an adorable 2 year old lab. He was neglected as a puppy and fell off the second story. He suffered with a broken pelvis that was not attended to by a vet. When rescued, his hips already healed but he can sometimes show signs of stiffness (slight limping) for a few moments after he’s been resting for a long period. The initial recommendation was to keep his weight down to ease the pressure on his hips. Otherwise, he walks and runs without much impact. Regardless of a horrible past, he is loveable, loves to cuddle, crate trained, and likes to be around humans!

Bongo is mostly house trained, is eager to please, and is food motivated. He loves treats, feeding time, walks around the neighborhood, and napping. He barks infrequently and has played very well with his foster’s dog, a 1.5 year old Jindo/Shiba who is very playful.

On walks, Bongo can sometimes pull and he’s a strong boy. The pulling is more common at the beginning of the walk and tends to subside later in the walk. He can get excited by other dogs but the energy is positive and curious — he really just wants to say hello. He needs a little encouragement to play with other dogs but will engage when he’s in the right mood. It will take some work to correct his leash pulling but, with treats, he’ll be motivated.

Bongo has chewed on a few items around the house but nothing destructive or concerning (a few pieces of paper and cardboard). He’s not overly interested in toys but will occasionally chew on one. He will go for any food that is left out– and he’s pretty tall once he gets onto his hind legs. So beware in the kitchen or dining room as he’ll look for his opportunities! He seems to be attached to the family, and has made himself at home on the couch and spare bed (his 2 favorite nap spots).

Bongo is a big dog (50+ lbs) and sometimes doesn’t know his own strength (he loves to stick his head everywhere). He’s been good around kids, and warmly accepts pets from strangers. He knows a few basic commands but could come a long way with the proper training

We are looking for a home who understands the responsibilities of owning and raising a dog as a member of their family. Bongo is patiently waiting! 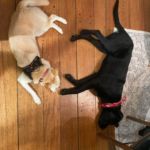 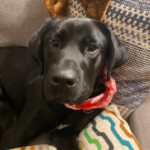 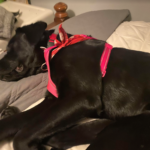 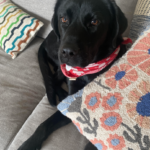 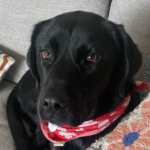