UPDATE: Happy to share Cooper has found his loving forever home! This little guy found himself at the shelter at a very young age and due to medical issues ended up growing up there before he made it on the euthanasia list. Thankfully there are people rooting for him and he was able to make it out. Now Cooper is enjoying his second chance at life with his wonderful new mom Leah! 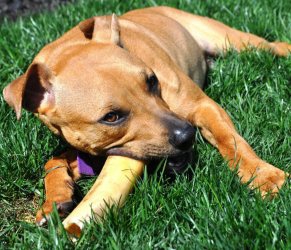 Meet Cooper! Cooper is a 10 month old pit/terrier mix about 45lbs. He has spent his entire life (since age 7 weeks) at the Peninsula Humane Society in San Mateo Ca. When he first arrived, he was exposed to parvo. They kept him in quarantine for two months. He was lucky and never contracted the disease. After he was 4 months old he was put in a regular kennel and was available for adoption. Cooper had been evaluated several times during his stay with the humane society. He had always received good grades. But recently, he just seemed to loose interest and appeared to be aloof. Management decided he had spent his entire life, up to that point, behind bars (in a cell all by himself). Therefore, they decided to euthanize him. 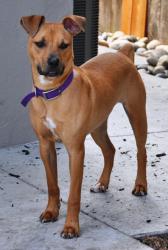 A volunteer at this shelter called and told us Cooper’s story. It was evident once Cooper walked into his foster home, that he had “never” been in a home before. He stared at the TV and was startled by household noises dishwasher, dryer….he did however get along with all the dogs! It has been almost a month since Cooper was rescued. He is great! He is a little frightened by adult males. He barks at first but then recovers quickly and will respond to the male. Cooper has a lot of energy, he loves walks and loves playing with other dogs at the dog park.. He is very affectionate and loves to give kisses. Cooper is patiently waiting for his perfect forever home!