Meet Spooka! Spooka is a spooky, spookable pooka puppy. Underneath her stunning, ghostly appearance, she is a very normal little baby-girl, full of quirks and personality.

Spooka loves to snuggle. So much so, that she ends up underneath you, behind you, and in places you’re not sure how she can even fit. She likes to sleep under the covers on the people-bed at night, but her foster mom has to put a pillow between, because she kicks her in the stomach and head nudges for 8 hours straight. She’s a big kisser, and even sometimes gets worked up enough that she becomes a chomper, pulling at clothes to get you to play. She is comically submissive, and nose-dives the length of the couch, belly up, waiting for you to trap her and pet her.

Spooka gets along OK with the other dogs. She does polite butt-sniffs with ones she meets on walks, but she isn’t a big player even with her foster siblings. There have been a couple very brief episodes of resource guarding. She would probably be OK as an only-dog. She’s definitely more of a people-dog.

She loves to play with her foster mom’s cat, although she has recently learned the joy of chasing said cat (who doesn’t run away). She wouldn’t hurt it, but she might not do well in a home with a cat who is very afraid of rambunctious puppies.

She will take treats from strangers, but it takes her a while to warm up fully to new people. She has also just found her voice! She’s not a “barks at everything” dog, but she has just started barking at people who make her nervous, and she is likely to be the kind of dog who might bark or even growl at the male family member (husband, boyfriend, adult son) for a week or so until she’s fully bonded. She’s also attached to her foster mom, and has been known to howl for a bit when left alone. She particularly doesn’t like being left alone in her crate.

Spooka is house trained with a doggie door (except in the rain, or if she forgets to go outside first thing in the morning). She does get carsick, but doesn’t mind the car. She’s OK on leash but does pull. She has learned the exciting fact that dressers and tables hold *fun things* on them, and she will find them all and bring them outside. She particularly likes shoes, socks, and slippers.

We are looking for a home who understands the responsibilities of owning and raising a dog as a member of their family. If you are interested in Spooka, please fill out an application! 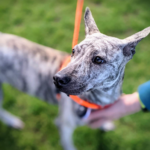 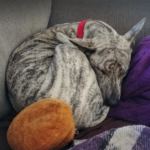 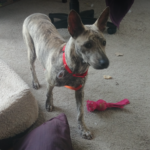 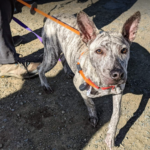 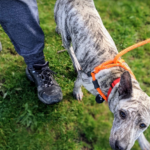 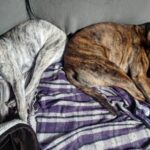 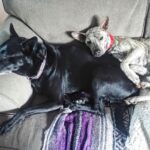 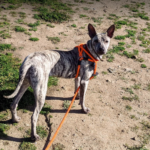 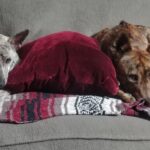 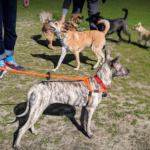 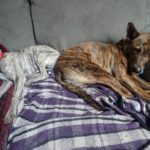 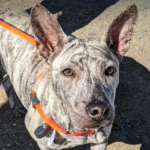 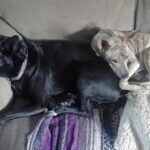 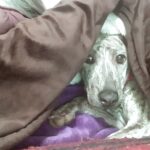