Meet Kkami! Kkami is an adorable 10 months old Korean Village Dog mix! She is tiny, sassy and the sweetest pup. She’s a firecracker at home, chasing the ball, wrestling with her person, giving all the kisses, and loves playing tug with a rope toy, four times her size. However, she’s an introvert outside of home – she isn’t shy as much disinterested in other dogs she meet on walks. She co-exists with her foster home brother; they both sleep in the same person bed, sit on the sofa, trade off on toys, but do not play with each other very frequently, or for very long.

Her people interactions are the same, she has taken to one other person (who she sees daily), so she isn’t human opposed, just is friendly and interacts with the ones she knows. She climbs her people, licks them, snuggles – all the things. She’s just shy at first, but opens up with time. With kids she will also be shy initially, so children will need to know about her personality and be patient with her. Due to this, we recommend a home with children 13 years and up.

She’s part bat with those amazing ears and pointy nose, has a wisdom waaaay past her 10 months, but is yet the silliest pup. People driving past have stopped to comment on how cute she is and sometimes, her lip sticks to her gums and she has the best accidental sneer/smile, it’s too good. On a windy day, she will chase the leaves down the sidewalk. SO CUTE!

Living in an apartment building, with constant construction across the street, she will only bark if someone closes their door too loudly down the hall or if the people upstairs are too noisy. She’s not overly reactive, but is noisy compared to her quiet Jindo foster brother. A house with a yard would likely be best. Another dog shouldn’t’ be a problem, but don’t expect them to become best of friends.

We are looking for a home who understands the responsibilities of owning and raising a dog as a member of their family. Kkami is patiently waiting! 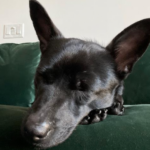 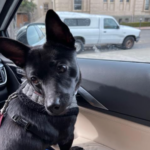 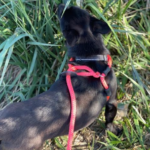 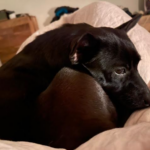 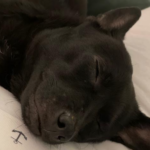 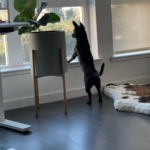 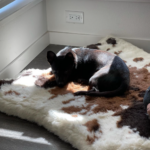 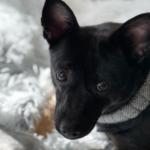 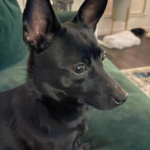 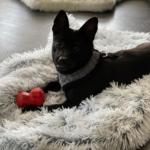 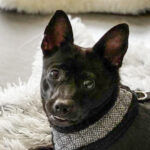