Meet Duke! Duke is a gorgeous 11 month old Labrador retriever mix, weighing around 60 pounds. He is part of our international rescue program and came to us from one of the biggest meat farms in Korea that was shut down. The dogs lived their whole life in rusted metal cages and stood on floating metal bars. When they were rescued many had a hard time walking on solid floor due to always standing on bars. They were very scared but so so sweet! As expected many were underweight and under-socialized. There were over 300 dogs from this farm, youngest being 2mo and oldest 9mos. They were all pups! Duke was one of the lucky ones who survived the freezing weather and was able to find a ticket into the states.

Duke is now being fostered in San Ramon, CA getting lots of love and TLC. Despite his suffering early in life, Duke is extremely loving and affectionate. He is good with other dogs and absolutely loves people! Duke uses his big paws to play and loves to snuggle! He is not a barker (we’ve only heard him bark once in almost a week) and has little to no separation anxiety.

Duke is adjusting to living in a home environment amazingly well. He arrived at his foster home on Feb 11th. After the initial shock from the travel and being separated from his foster setting in Korea, he is very much feeling at home. Every day he is learning and trying new things (even going in and out of doorways and up and down steps is new). He is still working on consistently going potty outside, but has made a lot of progress. He is currently not sleeping in a kennel, but in a gated family room/kitchen area with his foster’s other rescue from Love and Second Chances (a two year old Jindo mix). When he first arrived, Duke did not want to leave his crate. It took a lot to get him out, so his foster family have been hesitant to force the kennel sleeping (plus he hasn’t been having any accidents overnight).

Duke loves being outside, as this is where he was during the day at the doggie daycare. He is loving going on walks and is still working on his leash training. Duke tends to walk better when their other dog is also with them (sometimes refuses to move otherwise). They’ve been taking him on several walks per day. Duke is a big, playful dog and sometimes doesn’t know his own strength. He does jump on people at times when he is very excited, but we’re working on that! He is a very enthusiastic eater and drinks a ton of water. He is basically your typical slobbery lab! Duke doesn’t have much experience riding in vehicles, but his foster family have been trying to take him on rides every couple of days, and he seems to be enjoying it.

Duke has so much love to give and will do well in a home with plenty of room to move, a yard (preferably with a grass area), multiple people around (sometimes he still needs to be lifted or carried when things are new), and children that are upper elementary age or older, as he’s such a large puppy and still in training. He will need a home with another confident and friendly dog as he finds comfort in another canine companion and learn through following the other dog. He is very sweet and will need a home that will give him the love and patience he needs to thrive. Duke is great with dogs, although shy and timid he is very eager for love and attention. Duke is patiently waiting for his forever home!

Duke is being fostered in San Ramon, CA. If you’re interested in adopting, please fill out an application! 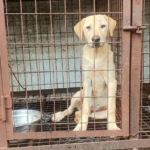 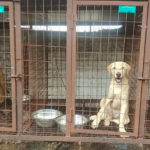 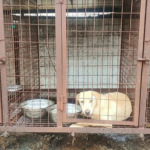 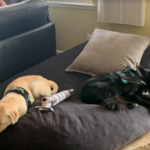 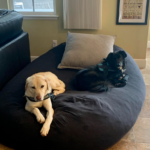 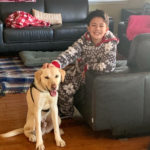 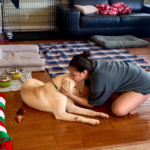 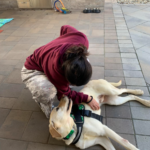 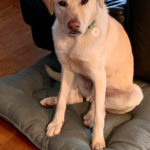 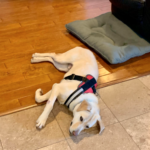 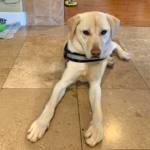 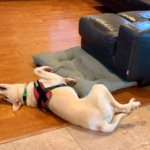 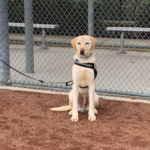 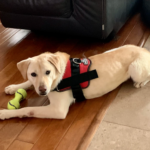 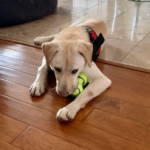 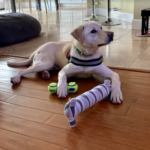 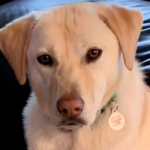