Meet Charles! Charles is an adorable 10 months old Samoyed/Jindo mix! Charles was rescued out of a Korean meat farm. Even though Charles was mistreated and lived in horrible conditions, he is always very happy and will approach people with a big smile and wanting affection. He is the sweetest boy!

Charles likes to follow his foster mom around and wants all the pets and scratches, which he’ll thank you for with little kisses. If she ever loses sight of him, it’s because he’s standing behind her. He’s gentle and not too pushy, but can get underfoot. Charles is a bit territorial in his space. He will bark when he hears strange noises outside in the night and at one guy who kayaked past the yard. While not aggressive, he tends to herd her foster’s dog away when she’s giving her attention and chase her out of the living room. Her dog is extremely submissive, so it’s hard to say how this would be with a more confident dog. This was less prominent in a neutral environment, with other dogs, but seems to be increasing at home.

He’s been great with going potty outside, in appropriate areas. In the yard, he only pees on the rocks by the fence, and he only poops out on walks. In 8 days, he’s only had one accident (overnight in the very beginning). Everything is new for Charles! There’s a lot he’s never been exposed to, and he’s very slowly getting the hang of toys, balls, tvs, and such. He takes a hard look at fire hydrants and transformers. He’s never even tried to go on the couch or a dog bed – probably doesn’t know how comfy they are! It took him a while to warm up to puppy play as well, but he’s getting the hang of it.

Charles is a bit of a slow poke on walks and keeps a steady path when it’s just him and his foster mom. When walked with his foster’s dog, there’s a bit of a mad dash to be the leader, he can pull forcefully, and zip around. One issue he has is separation anxiety, but he’s made massive improvements! Initially he’d whine anytime he’s left alone, and would whine/cry/howl endlessly at bedtime (when he is penned in the kitchen). Once, early on, he jumped over the baby gate to get out. His foster has been working on it and gotten it to just a few minutes of whining at bedtime, and all good during the day.

Charles is becoming more and more active every day. He’s definitely got energy to spare, and does better at night when he’s had more exercise (three short walks has been our sweet spot). We are looking for a home who understands his past and understands the responsibilities of owning and raising a dog as a member of their family. Charles is patiently waiting! 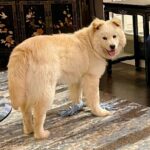 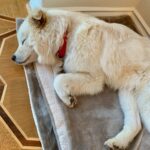 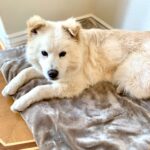 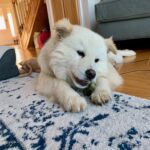 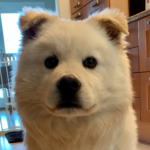 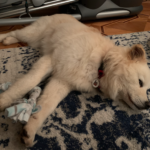 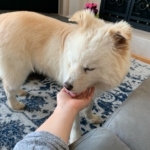 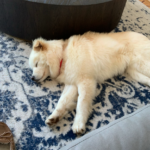 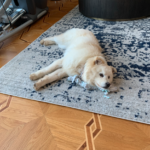 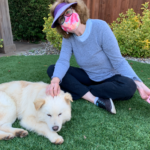 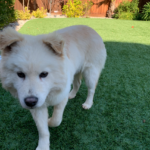 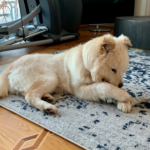 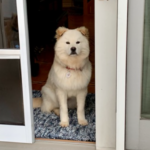 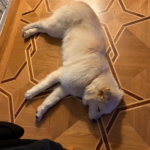 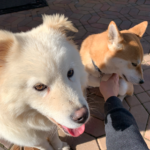 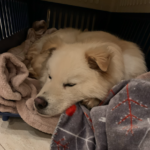 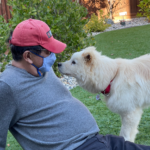 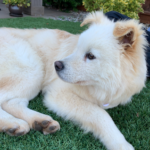 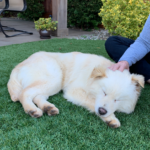 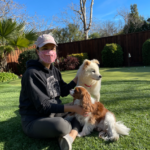 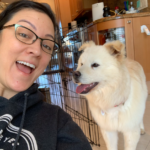 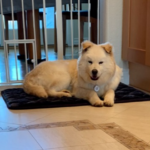 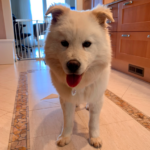 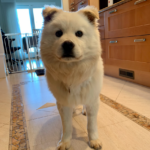 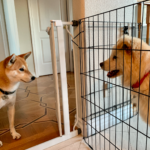 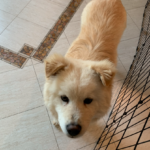